A wide range of industries are taking their single physics simulation tools and moving towards a multiphysics approach which couples two or more solvers to close the gap between simulation and reality. Rotational electromagnetic machines in particular use all three of the main physics areas to design products which achieve increasingly high performance and reliability targets using less material and consequently less cost. However these components are always part of a complex larger system which is time dependent. Simulating a single turn of a motor with all three major physics areas is a time consuming task, simulating a control system driving the motor over millions of rotations is simply infeasible. How can we take such detailed simulations and simulate the entire system without sacrificing the important details? ANSYS Simplorer is a dedicated system simulation tool which interfaces with the various physics areas to utilise models at various levels of detail, from heavily simplified approximations all the way to full 3D, high fidelity transient simulations.

The power train for an electric vehicle has a number of critical components which are tightly interfaced together. The electric motor, mechanical linkages, batteries, motor controller and embedded software can all be simulated individually using the various ANSYS tools available. Making a small change to one component can have amplified effects in another part of the system. This effect won’t be seen until all of the components are brought together and the final product is assembled. With ANSYS Simplorer, the entire system can be simulated and these effects predicted. 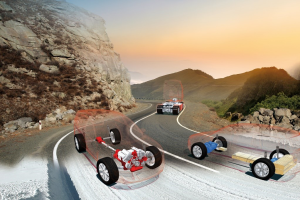 In particular there are a number of components in an electric powertrain which are designed using ANSYS tools:

Rather than use a full 3D transient simulation for each component, Reduced Order Models (ROMs) can be generated in various forms by each solver and loaded into ANSYS Simplorer. An overview of Reduced Order Modelling will be covered in a later blog post. Using this methodology, a transient which would take days can be run in seconds, making parametric studies and optimisation routines feasible and extremely efficient.

Described like this, System Simulation sounds like the holy grail of CAE. However, a number of assumptions are made which are crucial to understand and take into account when simulating large scale designs such as this. ROMs are primarily a set of inputs and outputs which are connected using a transfer function. The form of this transfer function varies from model to model and can be based on either a time based function or a frequency based function. When the model is used within the range it was calibrated for, the model is extremely accurate and the results can be indistinguishable from the 3D transient.

For those who are familiar with electronic circuit analysis, Simplorer looks and operates in a similar manner to a graphical SPICE simulator such as LTspice. In fact the power electronics industry uses Simplorer exactly like a SPICE simulator with the exception that they can add detailed multiphysics models to the circuit further down the development path. 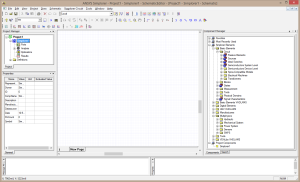 At the simplest level, the circuit simulation capabilities can be extended to support multi-domain simulation. In the following example, a digital control is integrated with an analog circuit in the electronics domain. An electromechanical model of a solenoid then interfaces between the electrical circuit and the mechanical circuit to control a hydraulic circuit. This simulation uses ideal components in all areas which is extremely fast to simulate and is suitable for analysing the general behaviour of a design. 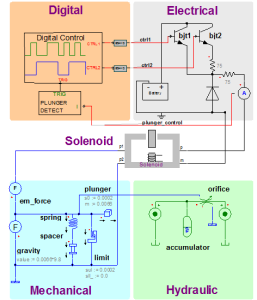 In addition to the extensive library of components included, Simplorer supports most of the ANSYS products natively with either 3D transient, frequency based state-space modelling, or both. A dynamic link with MATLAB Simulink is also available. Should a particular program outside of the product range be required, then there is a state-space tool to create new models or the LTI toolkit (additional install) can work with any step response data.

Simplorer also supports Optimetrics to perform parametric and optimisation studies. In the following example, a LTI model of a heating element in FLUENT is controlled with a PID system. Using a parametric study in Optimetrics, a large number of combinations of the P, I, and D constants were simulated to determine an optimum combination. This parametric study can then be used to seed an optimiser to refine the result further. 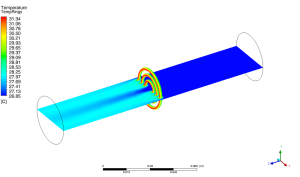 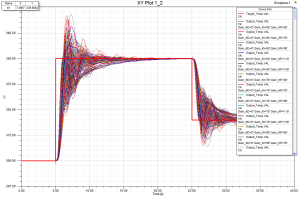 Set of Responses for various combinations of P, I, and D generated with Optimetrics

In the next blog post, we will be covering Reduced Order Modelling for System Simulation using ANSYS Simplorer and the other ANSYS products.