We recently sat down for a quick interview with Peter Brand, Specialist Application Engineer at LEAP to find out more about his experiences from showcasing SpaceClaim to a range of engineers from different industries across Australia & New Zealand. 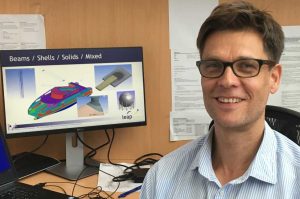 Peter, you’re a senior application engineer and you’ve trained & supported many people to use SpaceClaim over the years – what are people’s first reactions when you show them SpaceClaim ?

They always comment that it’s just so fast at what it does, and also people often like how you can work with imported CAD models from really any source at all – you can clean them up faster in SpaceClaim than you could do in the original CAD package. I think that because it’s a direct modeler, you can just do things a lot quicker than in typical CAD packages.

What do you mean exactly by “cleaning things up”?

For example engineers will often want to make simplifying changes to their model, especially if they’re defeaturing it for simulation – often you need to remove many small fillets or small edges. In a typical feature-based CAD modeller, you’ll have a parametric history which has many dependencies/relations – these will often cause problems in your CAD if you accidentally remove bodies that are relied upon by other features. With SpaceClaim, it’s a direct modeller so you can just go through a process of cleaning up your geometry and removing any unnecessary features without worrying about affecting any existing dependencies.

There are lots of automatic tools in SpaceClaim that our customers use to find small edges, identify sliver surfaces and they also take advantage of the intelligent searching as well – with all of this it becomes very quick to defeature a model by firstly identifying and then removing any small features that you won’t need for simulation. It’s also very quick for creating additional geometry, and it has great tools that are geared towards preparing geometry to be ready for FEA & CFD – typical examples are when we convert solids into beams and shell elements for FEA, and when we extract either internal and external fluid volumes for CFD.

What’s the learning curve like for new SpaceClaim users?

Personally I’ve seen that people find it very easy to learn – in my experience, when I deliver SpaceClaim training, I usually start with just a 30 minute demonstration and then I immediately ask everyone to start working on a workshop example – they can do this without following guided instructions, but rather just using a few simple SpaceClaim tools I’ve shown them upfront to create something from scratch. I find that most people can do this without any problems. 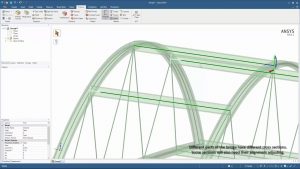 You touched on preparing geometry for simulation, can you talk a little more about why this is needed and how you do it in SpaceClaim?

SpaceClaim is the gold standard for simplifying CAD geometry, especially for beam and shells models which are widely used by structural design engineers and anyone working with thin-walled bodies and truss-like structures. SpaceClaim has the right set of tools to automatically convert an arbitrary solid from a CAD package without any history there – it will start by recognising midsurfaces for any thin-walled bodies, then automatically extend those midsurfaces – connecting them and breaking them as you need. For beam models, SpaceClaim has excellent tools to convert tubular geometry into lines (beams) with various cross-sections, eg. I-sections, T-sections – it stores those accurate profiles. Again it has tools to extend and connect the beams to each other – using these tools, I find it incredibly easy to convert any arbitrary solid model into a beam and shell model in just a few quick steps that is ready for simulation.

What feedback do you get from structural engineers in particular who are doing this kind of work everyday?

A lot of big companies, particularly the big structural design consulting firms, often have a mix of software at their disposal, so in our jobs we will regularly meet with teams who have licences of both ANSYS as well as multiple licences of other FEA tools such as Strand7. For example, I was in a meeting recently where we were discussing a complicated model of a crane structure and I asked around the table how much time they thought it would take them to prepare that particular geometry for use in Strand7 – they unanimously responded “probably 2 days” – an estimate which aligns with my own experience when I’ve worked for previous companies doing projects of a similar complexity. But then I started a live demonstration using SpaceClaim and in under 10 minutes I was able to convert the entire crane geometry to a FE model of beams and shells. Of course, they were really impressed – but for me it’s something I see almost every day when we’re out showcasing SpaceClaim. It’s actually incredibly fun taking these complicated CAD geometries that cause our customers so much difficulty and stress, and having the tools in SpaceClaim to so quickly prepare this CAD for simulation – plus, I love seeing the looks on their faces as they watch it happen. 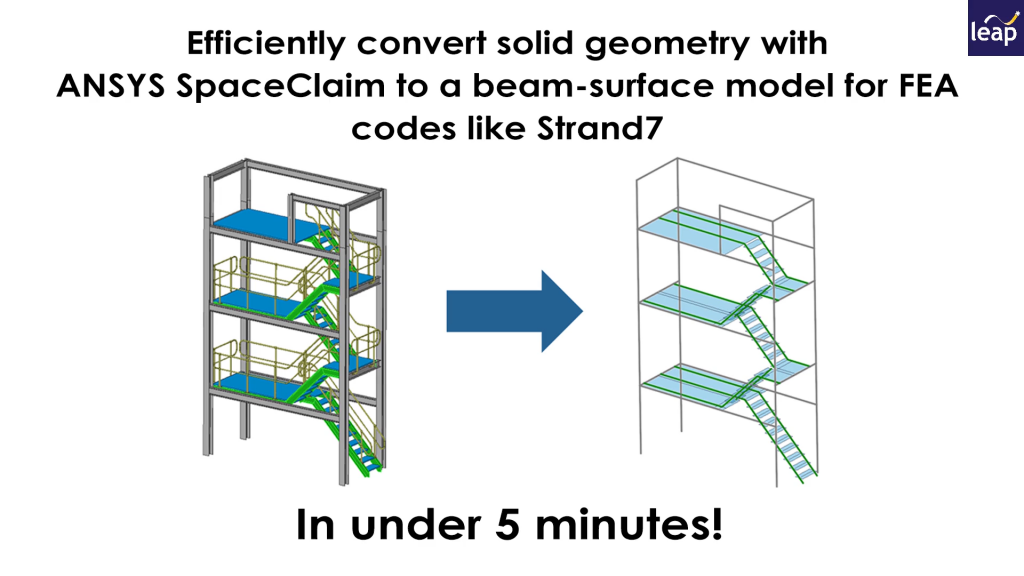 Where are the biggest time savings?

Let’s imagine a crane that consists of 3D dumb geometry, no relations, no history – the geometry will be a complex mix of thin-walled solids for the plates and lots of 3D tubular sections for the beams – so what we will do in SpaceClaim is simply import the entire assembly and then start by grouping them into thin-walled and beam-like bodies. Then for each group you just use the automatic tools to convert those thin-walled bodies into midsurfaced surface geometry, and likewise convert the 3D solid tube members into beams. SpaceClaim’s automatic extension tools will then connect them all together – a very quick process and this is where some of the biggest time savings can be compared to other methods.

Often extracting beams and shells is only part of the process – what happens when things don’t line up afterwards?

So often after the automatic extractions of shells and beams, the ends will not line up – SpaceClaim has a great mix of manual and automatic tools for extending these surfaces and beam ends.  For example, if you have a weld in a 3D model and convert it into surface geometry, then there will be a gap at that T-junction, so SpaceClaim has automatic tools that extend the surfaces to each other, imprint them automatically, or break them up automatically as needed. The same applies to beam elements – we often need to extend line geometries to each other or to adjacent surfaces and the tools in SpaceClaim allow this automatically.

Is it only ANSYS customers that you’re dealing with?

Not at all. We have a diverse range of users who don’t actually have ANSYS solvers yet but they might be using tools like Strand7 and they need a way to quickly convert complex CAD into shells and beams for their FEA tool – often they start with CAD data from lots of different sources that they’ve received from their client. So we’re actually seeing lots of different people, especially structural engineering consultants in particular, who are buying SpaceClaim just to prepare their geometry for a range of FEA tools, even as diverse as Nastran, Abaqus and Strand7 users.

SpaceClaim is a package that is very affordable – you can even order through LEAP’s website on a subscription basis for only $2K or so – this will give you a standalone SpaceClaim package that you can use to prepare geometry for any general simulation package, regardless of whether you have ANSYS solvers or use other FEA/CFD tools. Since SpaceClaim speeds up things so dramatically, most of our customers find they save significant time on each project – for our customers who are working as consultants, time is often the major cost factor and if they can reduce the time taken for model preparation, they work much more efficiently and can effectively earn more money on each project they complete. In fact, at our recent CONVERGE conferences earlier this year, we even had one of our customers stand up and say that SpaceClaim was the best software they’ve ever purchased in terms of ROI!

Why do you think ANSYS purchased SpaceClaim and integrated it into their ecosystem?

SpaceClaim was already a partner within the ANSYS ecosystem, but I think that ANSYS recognised the massive time savings that customers were getting with SpaceClaim so they knew they needed to buy the technology and make it available to everyone doing any kind of prep work for simulation. Now customers have the choice of using SpaceClaim as an easy and effective interface between their simulation & CAD – whether or not they use ANSYS solvers.

For structural engineers who currently use SpaceClaim to prepare CAD for other FEA tools, what are the benefits of using SpaceClaim integrated with ANSYS own simulation tools?

SpaceClaim is tightly integrated in the Workbench environment so it has a direct coupling with ANSYS Mechanical and ANSYS CFD and other tools such as Electromagnetics, so if you make geometry changes in SpaceClaim then it will automatically propagate them within the Simulation environment – using it in this way also opens up the opportunity to use optimisation methods in the Workbench environment.
Personally I think that SpaceClaim benefits anyone who does any kind of simulation – be it Mechanical, Fluids, Electromagnetics. If they have dirty geometry that is not connected properly or has overlaps – they will benefit from SpaceClaim by making it faster to simplify and defeature geometry before simulation – this is also true for electromagnetics simulation with packages like FEKO or CST, as I’ve recently seen users of those tools benefit immediately from using SpaceClaim.

Thanks Peter for taking the time to answer our questions!

Would you like to see more? Watch the video demonstration below – where Peter shows us how to cleanup the CAD for a three-level access tower structure to be ready for FE simulation in Strand7 in under 5 minutes:

To get started with ANSYS SpaceClaim, visit our SpaceClaim page on the LEAP website and choose to Buy Now or Request a Quote to speak with Peter or one of our other experienced engineers.